The beginnings of the Town of Kenly go back to a day in the year 1885, when owners of the Wilmington and Weldon Railroad purchased a right-of-way on a tract of land owned by Charlotte Watkins (referred to in latter deeds as Lottie) and Augusta Barney Watkins. Shortly thereafter, the actual laying of the railroad track began. Only a matter of days later, on April 2, 1886, Lottie Watkins (Great Aunt of Henry Watkins) sold property to the W. & W. Railroad, this time two tracts of land comprising 51.5 acres, more or less, for the grand sum of $278.50, or approximately $5.46 per acre.

During the years that the W. & W. Railroad Company was negotiating for land and laying tracks in this area, a railway official spent a great deal of time here. He became friendly with and gained the respect of the citizens of the new settlement, and so endeared himself to them that they decided to name the place in his honor. The man was John Reece Kenly. 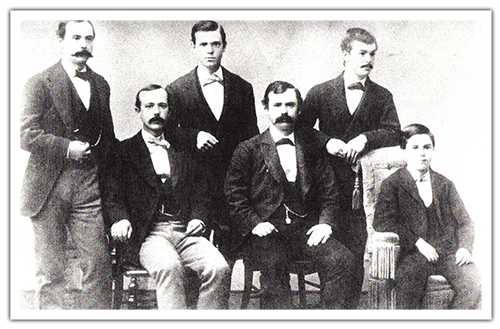 A native of Baltimore, Maryland, Mr. Kenly was born January 21, 1847 and entered railway service at an early age. He began working with the Pittsburgh and Connellsville Railroad (later Baltimore & Ohio) in July 1868, when he was 21 years old. Later he transferred to the Richmond and Petersburg Railroad Company. The Richmond and Petersburg, as well as the Wilmington and Weldon branch line through Kenly, was later to become a part of the New York-to-Florida Atlantic Coast Line, which merged with Southern Railway to become Southern Coast Line. John Reece Kenly enjoyed a distinguished career with the Atlantic Coast Line, from the time that he joined the company in April, 1882, until his death on March 1, 1928. He advanced through the ranks to become head of the Operating Department and from that position rose to become President of A.C.L. on December 18, 1913.